The Ukrainian brand Sky Country is gradually making its way into the French market and offers us here a wing for speed flying, on foot or ski.

It is the Scorpio sail repair workshop, which takes care of the importation in France, and we thank you very much for the loan of wings.

The 3-spoke lifts are simple but clean to finish, with magnets to connect the neoprene brake handles. These magnets lack a bit of power and the brakes tend to come off easily but nothing bad.

The trims are a little low to be handled without letting go of the controls, it also makes a little cheap, but only time will show their quality.

The sheathed and sleek line is simple and very easy to untangle. 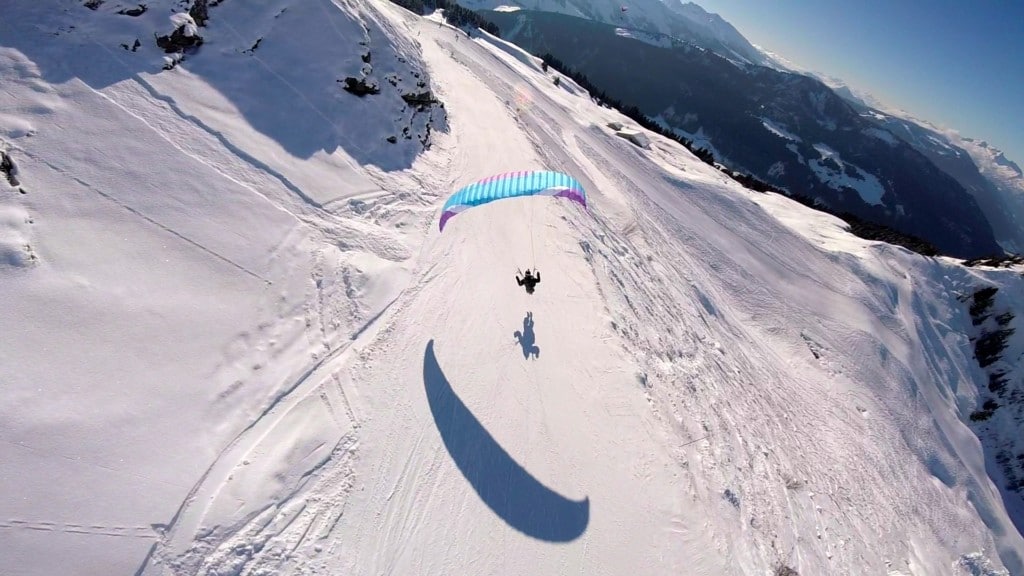 The skytex fabric from Porcher, in 40 g for the upper back and 38 g for the lower back, offers a good balance between weight and resistance.

With a weight of about 2.3 kg for the 11, the Escape is correctly placed in front of its competitors for the gram race.

The leading edge is profiled by classic mylars, with most manufacturers choosing rods for modern wings.

The profile is a little atypical, very flat in the middle, and the wing tips are much more arched.

The elongation of about 3.8 is quite average for a speedflying wing.

Inflation is no surprise for this type of sails, the wing is very good and climbs lightly.

Trimed to the ground, slowly climb up if we don’t stuff her. At mid-trims, the climb is more straightforward, requiring a normal tempo.

The handling is quite good but requires a good speed during the run-up. If we take off mid-trims, we’ll show a bit of brake after the speeding to feel carried.

On the proto in 9 m2, it will be necessary to take off at mid-trims, because trimée at full speed the wing is too high and stalls in the back at the slightest contact with the brakes during the run-up.

The speed is immediately present and quite exhilarating, without being extreme for this type of wings.

Trimmed to perfection, the sail is pitched up and offers a good glide in a straight line. But we must be wary of low speeds, especially on the proto 9, which, when fully trimmed, is close to stalling.

At mid-trims, a position that could be considered neutral, the wing seems to be the most consistent.  The dive and the resource are very correct. Nothing crazy, but the whole thing is homogeneous, easy to handle and you quickly want to get closer to the ground.

The glide of the 9 and 11 is also quite good, a good point for this Escape.

The control is firm, direct and precise, with a fairly short travel, as is often the case with this type of wing. Here again we are in the norm.

The fall rate in turns is quite surprising. Beyond a certain angle, it becomes very important, with a feeling of slight delay that can sometimes surprise you and make you see the ground closer than you would have wished.

Driving with a fifth wheel is efficient, and as is often the case with wings with a fairly flat profile, it is interesting to be able to combine harness and control for precise steering, especially near the ground.

With the habit and adapted piloting, we’ll quickly get to the drop rate, and he’ll become an ally for the local flight.

The roll is very present and player. By pushing down the control a little more, the yaw is added to it and quickly places us on the ground.

The barrel comes in a little bit faster, but with a certain lack of fluidity.

The pose is also made without surprise for the regulars of this kind of sails. For the others, a slight increase in speed with high arms and a deep and late rounding will allow you to pose while jogging without difficulty. 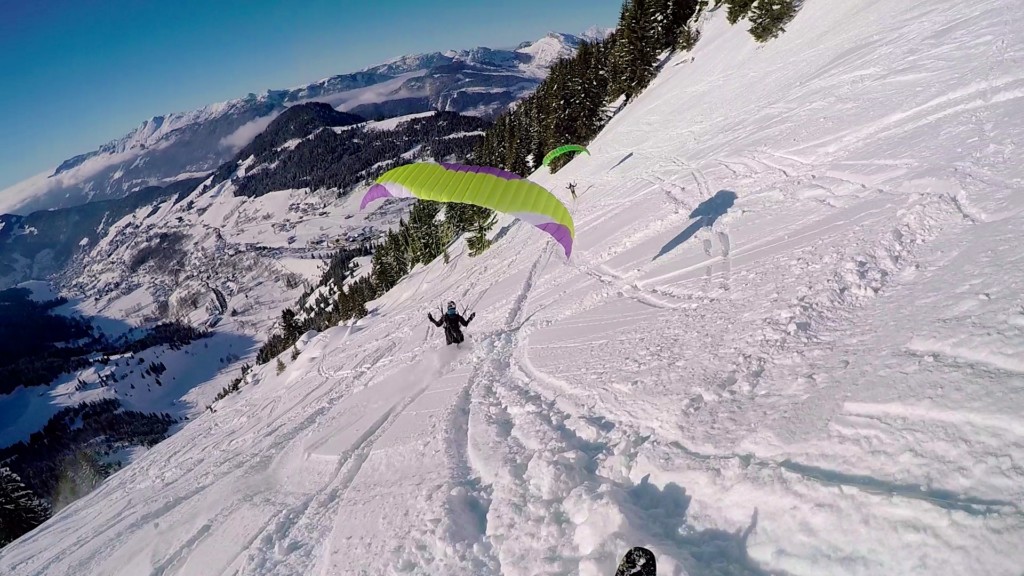 The kite behaves rather well on skis, allowing a versatile use. But don’t dream, it’s not the all-purpose wing yet. It does not tolerate low speeds and unloading very well. It will be necessary to ride gentle slopes and wide enough not to be embarrassed, but it’s still doable.

If you practice speedflying more often than speedriding, this Escape could be a good compromise.

A wing clearly typed speedflying, of a rare accessibility in 11 m2, without losing any character. The handling is quick and the range of use is wide for its category.  A good surprise, therefore, for this brand little known in France, which brings us a product quite consistent to the practice, with very honourable services and at a very decent price.

For any information or test, you can contact Scorpio by clicking on the image.