The Bip-Bip is the mini-wing of ITV, it is located in a coherent way between the Pil-Pit (speed riding wing) and the Awak (mini paraglider perf).

Its theoretical program is very broad and concretely its use is indeed very versatile.

The Beep-Beep is no longer very young but it is far from being outdated, the first models date back to 2010 and still in the areas, a 2nd updated version was born in 2014.

The Beep-Beep 2 is almost identical to the first one with a slight improvement in performance.

It comes in 3 sizes:

14 m2 – 16 m2 – 18 m2; their behaviour is fairly homogeneous and without surprise from one size to another or depending on the wing load.

The 14 m2 is a small car, it has a good glide for this surface and is well playful. Its lengthening of 4.3 is large enough for its size, which makes it quite lively in turbulent aerology, especially if it is depressed a lot.

The 16 m2 is probably the most successful, especially because it was the one that was developed first, and from which the other sizes were derived.

His behavior is very pleasant. Playful and wise at the same time, and one feels a more pronounced harmony of the wing than in the other two sizes.

The 18 m2 is, for its part, the wise big sister of the family, maybe a little too much.

For those who are not familiar with mini sails, this will not be a problem but an asset: they will find the glider’s reference points when fully triming it and will be able to detract from the glider’s position in order to gradually change the glider’s behaviour, and it will change!

But for those who are used to small surfaces, the 18 is likely to look rather soft. 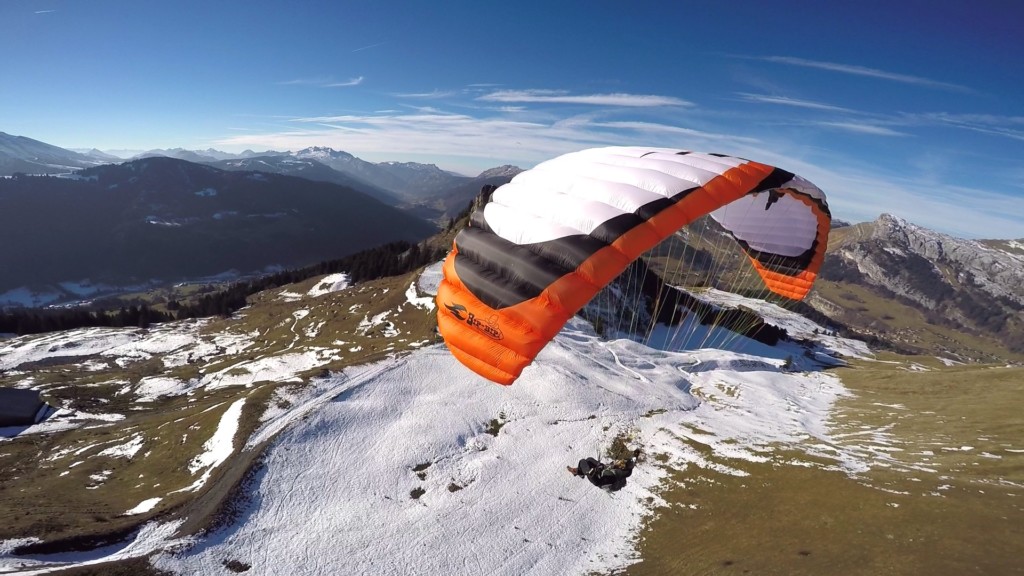 The materials used by ITV are, as is often the case, of good quality. Even if the assembly is quite simplistic in construction, it has the advantage of being robust.

The lines are sheathed and very numerous because of the 4-line risers typified paragliding. The untangling is not really what you would expect from a mini sail.

The Bip-Bip is also quite heavy, which is not an advantage for one of the practices to which it could be dedicated: hiking.

The trims are huge, it’s the major advantage of beep-bip. They give it an incredible speed and dive range.

They are placed a little low, you may have to release the controls to handle them if you like to drive with your hands up.

The notches of adjustments are innumerable and one is quickly lost in the moment of adjusting them in the air, markings with felt, of different colors, can help to differentiate them or to make reference marks.

Another problem is that the notches wear out very quickly, but the trims don’t slip and ITV will change them without talking to you if you send back the old ones.

Please note that the ITV service is very pleasant, do not hesitate if you stop by Doussard at the Mika Shop to try a wing or have your ITV repaired, it is a very pleasant point of customer care.

The wing’s profile is well arched, so the wing does not tend to degrade too much in turns, a good point for soaring and thermal.

With a few pilots, we flew several years with the 3 sizes of Bip-Bip, and especially the 16 in many conditions.

However, we have flown very little with the 2nd version, but it shows a very similar behavior with a slight improvement in performance, as indicated by ITV.

The take-off is very simple, the air intakes are huge and with a little wind, the wing rises without the hands and without wanting to exceed too much.
Without wind, the wingtips have a little trouble opening. And fully trimed (abraded), the wing does not climb very well and tends to stay backwards.
Neutral takeoff is preferable.

The glide is pretty good, especially when you’re working hard. It’s not as good on the first versions, anyway, as on some mini sails like Spirulina or Zion.

The controls are responsive but in a very progressive way with a large travel. They are supple but not soft either.

The piloting of the harness is normal and predictable, one can even consider flying with a fifth wheel with a plate with the 16 and 18 but rather if one flies trimmed.

And don’t forget that harnesses with thigh straps are often recommended for mini sails.

Crimeed to the ground, the wing is raised. A position that allows a good glide and a moderate speed very practical for thermal flight or soaring in low wind.

The wing then has a fairly typical paragliding behavior.

The neutral is indicated by a yellow notch on the trims, all the risers are then at the same height, the wing is slightly piqueuse and its max fineness is obtained with a little brake.

Depressed, we have the feeling of having a speed-riding wing in our hands as the speed and the dive increase, as well as the firmness and reactivity of the controls.

A dozen notches are at your disposal after the neutral to increase the speed and the dive; it is moreover very rare to go to the last one. If you do, know that the wing is very sensitive and two fingers from the front, so be careful and hold it in contact.

The posture is childish, no matter the position of the trims. Still, avoid pitching up to get enough resources at the controls.
The depressed posture offers an endless flair but will require a few small steps to stop. 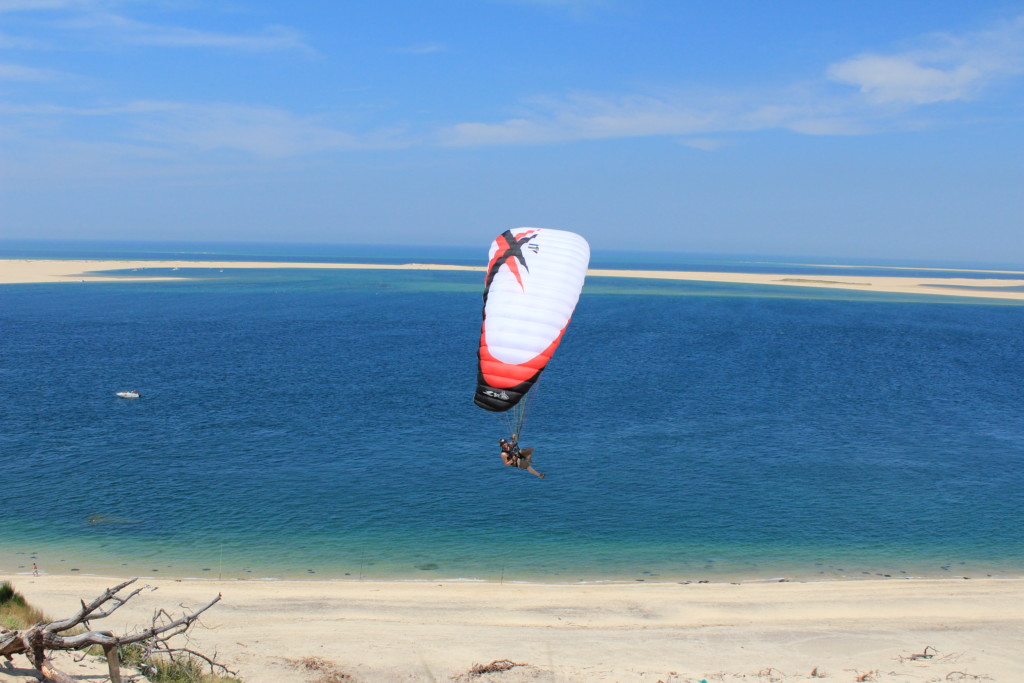 The Beep-Beep is one of the most versatile mini-sails on the market and with the widest speed range. By playing with the trims, it gives the feeling of flying with different wings but with a healthy and consistent behavior. It is very wise and easy to understand for non-expert pilots. But as Laurent Van Hille says,"what is good everywhere is not good anywhere". His favourite playground is still soaring for pilots who want an easy and solid wing in turbulent conditions. It will also find its place in trekking if you are not looking for absolute lightness, and in speed flying in calm conditions while playing with trims.

. In short, you won't have a lot of excuses not to make her get air!